Although lipid nanoparticles have shown great efficacy in drug trafficking, traditional delivery methods still remain unpredictable due to the complexed body regulation, which leads to drug activity in off-target organs and randomized biodistribution. Numerous elements including blood clearance and special tissue structures (e.g. blood brain barriers) could interfere with the LNP behaving patterns after they were administered into human bodies.1

Thousands of nanoparticles with distinct chemical structures and properties combined with a variety of formulation strategies were performed to effectively overcome such barriers.2 However, these have resulted in laborious in vitro and in vivo experiments to characterize/predict the performance of lipid nanoparticles in cells/bodies. For instance, most nanoparticle libraries were first evaluated via in vitro experiments in order to screen out the few best candidates before they were processed with in vivo tests, while in vitro screens cannot provide comprehensive whole-body biodistribution and could be a poor predictor of in vivo transfection.3

Herein, a system that supports fast in vivo screening and generates measurable results is urgently needed. This request could be achieved by the “barcoded nanoparticles” technique.4 In such a scenario, each nanoparticle was formulated with a unique short DNA oligonucleotide to generate the pool, which will be further injected into mice. After certain period of time determined by the cargo and the properties of nanoparticles, tissues/cells can be isolated to recover the oligonucleotides or barcode to generate quantitative results via numerous tests including sequencing or RT-PCR. Figure 1 was taken from reference 4 which illustrate the workflow of barcode LNPs.

This strategy has been applied into numbers of papers and shown obvious evidence of predicting the biodistribution of NPs in a high-throughput manner. Zvi Yaari and his co-workers have adopted this technique into cancer diagnose and personized medicine therapy.5 Figure 2 was taken from reference 5. 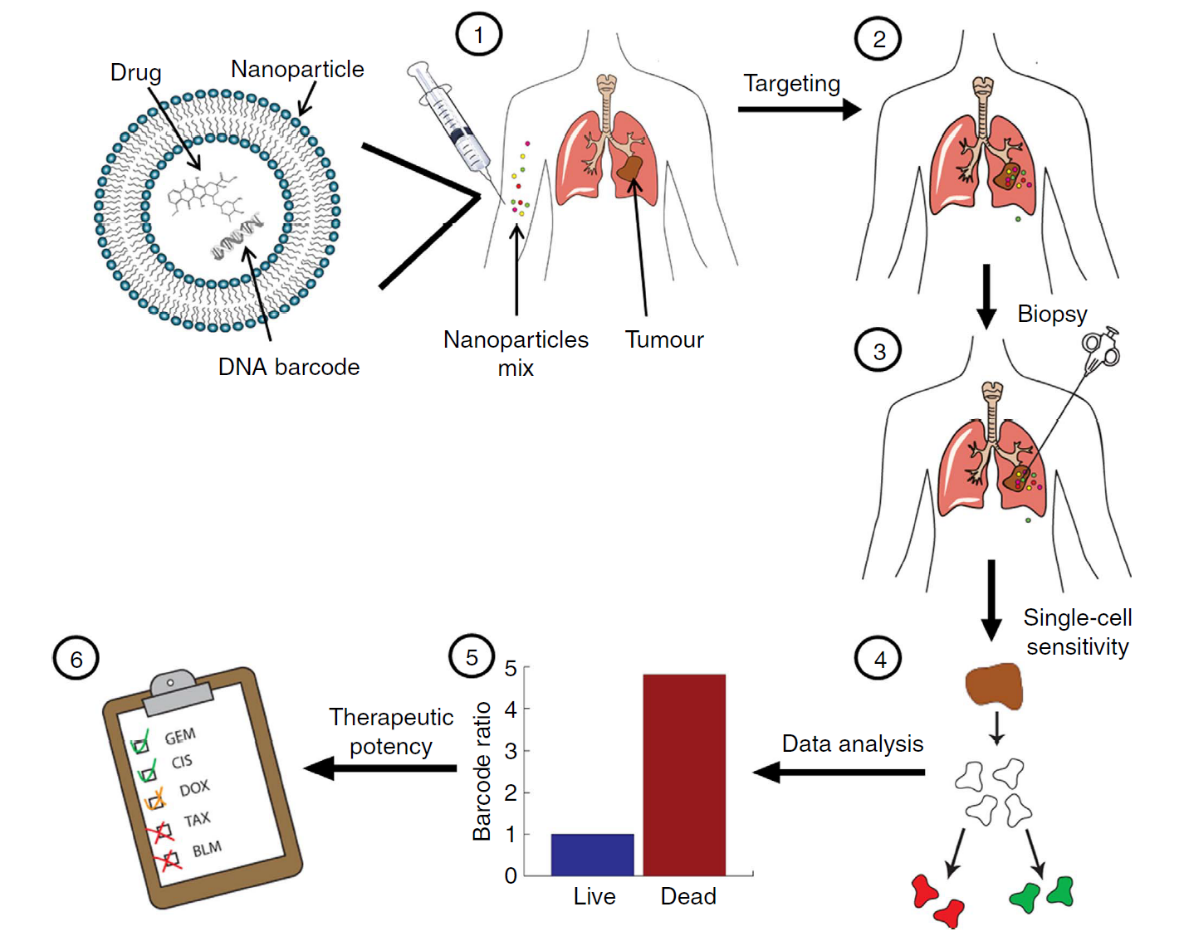 Figure 2. Using nanotechnology to probe the sensitivity of cancer to medicines. Barcoded nanoparticles (BNPs) were loaded with different drugs and corresponding DNA barcodes. (1) A cocktail of BNPs was injected intravenously. (2) The BNPs targeted the tumor and each of the drugs carried out its therapeutic activity inside different tumor cells. (3) Forty-eight hours later, a biopsy was taken from the tumor, and the biopsied tissue was dissociated into a single-cell suspension. (4) Each of the cells was sorted according to its viability (live/dead). (5) The barcodes were extracted from the live/dead cells and amplified using real-time PCR. The codes were detected by sequencing. The activity of the drugs inside the tumor was analyzed by recording the number of each barcode found in the live cells, versus the number of barcodes found inside the dead cells. In this manner, the orthotropic tumor was used as a miniature laboratory, which was diagnosed with the nanoparticles at a cellular level. (6) Based on the screened results, a suggested treatment protocol was devised. In our studies, we found this predictive assay to achieve the best therapeutic results. The overall diagnosis takes less than 72 h.5

Key services we can offer: