In enzyme-responsive controlled-release nanocarriers, there are several methods to come true the gating. Firstly, the substrate is used the gatekeeper, and it can block the hole of mesoporous silica nanoparticles. Upon exposure to corresponding enzyme, gates were removed to release drug molecules. Secondly, drugs are conjugated to the polymer scaffold by some special bonds. After specific cell uptake, these bonds are broken by corresponding enzyme, and then the drug molecules can be released from the polymer. Thirdly, the nanomaterials can be rendered enzyme-responsive by containing moieties in their main chain or side groups which can be cleaved by enzyme. Upon exposure to corresponding enzyme, the nanomaterials can be degraded, and the drug is releasing. 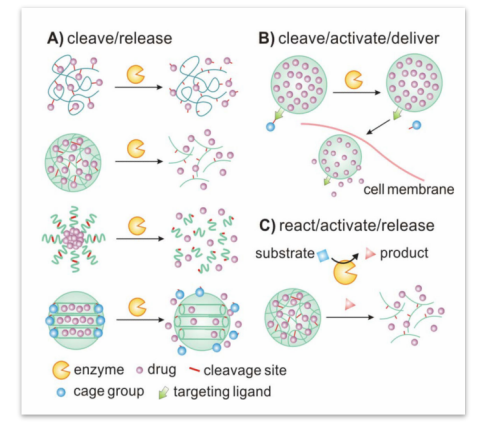 Enzyme-responsive drug delivery system has been witnessed a rapid development by exhibiting tremendous therapeutic and detection potency for cancer or other diseases at both research and clinical levels. By overcoming the limitations and drawbacks of conventional drug delivery, they offer unprecedented control over spatiotemporal drug release and delivery profiles leading to superior in vitro and/or in vivo theranostic efficiency. For example, active tumor targeting nanoparticles integrated with site-specific enzyme-triggered moieties can significantly achieve enhanced accumulation at the tumor site, reduced uptake by non-targeted tissue, as well as site-specific controlled drug release without a compromise in targeting efficiency and specificity. Oxidoreductases have been widely exploited to serve as a promising target for drug delivery systems or biosensing due to their fundamental role in oxidative environments which are generated by many diseases including diabetes and cancer. As many diseases are characterized by imbalances in the expression and activity of specific enzymes in the diseased tissue, dysregulated enzymes can be exploited to permit the selective activation of advanced drug delivery platforms.