Recently, mRNA vaccines have drawn extensive attention due to its potency to tackle various unmet therapeutical issues that are unable to be solved by traditional vaccine technologies. For example, live-attenuated vaccines sometimes exhibit safety drawbacks that could potentially induce pathogenic diseases. While subunit vaccines have been developed as an improved safe alternative, they are less efficient and mostly take effect in the presence of adjuvants.1

Although mRNA vaccines combine the advantages of the abovementioned vaccines and avoid of their risks, they still have to face some major issues including insufficient intracellular delivery efficiency and instability. To this end, several strategies have been developed to bypass such problems, and lipid nanoparticles (LNPs) stand as the most frequently used non-viral vector for the merits of efficiently bind and condense RNA, protect against degradation in the extracellular space and localize the payload at the membrane of the desired target cell, followed by cellular uptake and endosomal escape into the cytosol.2 Table 1 was taken from reference 3 which lists out many of the currently published lipid nanoparticles mRNA vaccine. 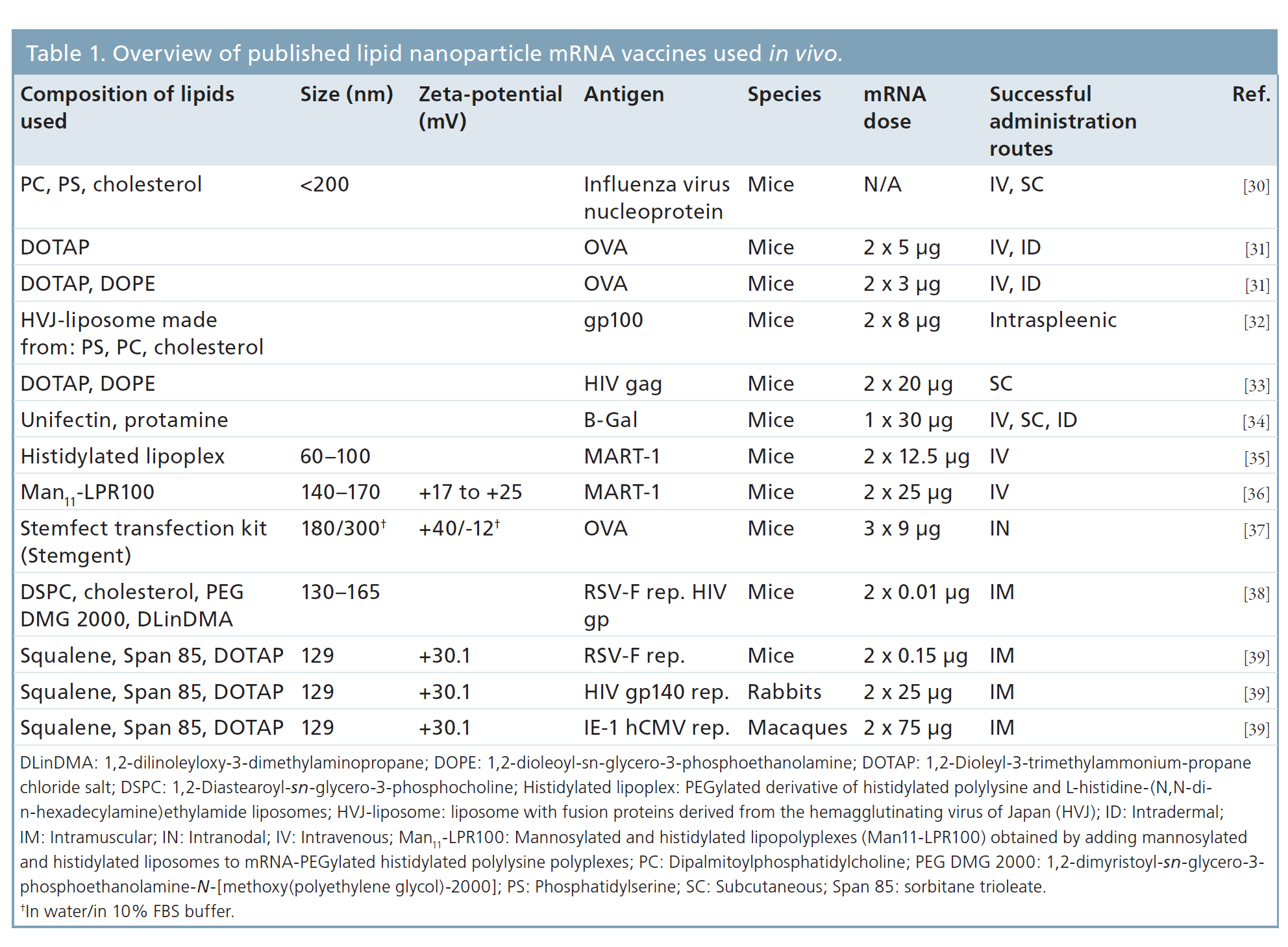 LNPs generally consist of a combination of different lipids which form an aqueous core. Most LNP are designed to carry cationic charge to efficiently combine with the negatively charged mRNA.4 However, several studies have reported that cationic lipids bearing a permanent positive charge are more toxic and less efficient, the potency of LNPs has been advanced significantly with the development of new, ionizable lipids.5 They usually contain amine groups which maintain a neutral or mildly cationic surface charge at physiological pH, thereby reducing nonspecific lipid–protein interactions and facilitating oligonucleotide release in the cytosol. Figure 1 was taken from reference 3 which illustrates the rationale of how LNP mRNA vaccine functions.

Since the most important targets for mRNA vaccines are professional antigen presenting cells (APCs), with dendritic cells (DCs) likely being the most relevant cell type, LNPs can be decorated to target APCs compared to other delivery methods. It has been proved that DCs are studded with different receptors, including lectins that recognize carbohydrate moieties present on many pathogens, and are involved in antigen capture and presentation. A wide variety of different DC receptors have been identified, including the mannose receptor, DC-SIGN, DEC-205 and Langerin. In recent years, these receptors have been characterized and used for targeted protein and protein–LNP vaccines, and could be further represented as LNP mRNA vaccine targets. In fact, mannosylated mRNA–LNPs coding for MART-1 have exhibited decent vaccination rate compared to the non-decorated analogs.6

Figure 1. Antigen presentation on MHC I and II pathways in dendritic cells. (A) Endogenous proteins with pathogen or self origin are primarily displayed on the MHC I pathway. These proteins are degraded into smaller peptides by the proteasome. The peptides are transported into the endoplasmic reticulum for loading onto the MHC class I molecules. This MHC I–peptide complex is then displayed at the cell surface to CD8 T-cells. (B) On the other hand, proteins that enter the cell on the endocytic route are displayed on the MHC II pathway. For this purpose, the MHC class II molecules are protected with the invariant chain (Ii) from binding to endogenous peptides in the endoplasmic reticulum. The MHC II-Ii complex is then exported through the Golgi to the MIIC/CIIV compartment, where the invariant chain is replaced with antigens. The MHC II–peptide complex is then displayed at the cell surface to CD4 T-cells.

Besides, adjuvants were usually required for conventional vaccination to enhance the immune response which eventually led to successful vaccination. LNPs could serve as the adjuvants themselves. LNPs containing cationic lipids, such as 1,2-dioleyl-3-trimethylammonium-propane chloride salt, have been shown to activate Toll-like receptor 4 (TLR4) and induce a strong proinflammatory response with Th1 type cytokines, including IL-2, IFN-γ, and TNF-α.7 However, most of the adjuvants are tested with protein-LNP vaccine.

Key Services We Can Offer: