Biodegradable polymers have a long history, and because many are natural products, it is impossible to accurately track when they appeared and used. One of the earliest medical uses of biodegradable polymers is catgut suture, which can be traced back to at least 100 AD. The first intestinal suture was made from sheep’s intestines, but modern intestinal sutures are made from high-purity collagen extracted from the small intestines of cattle and sheep. 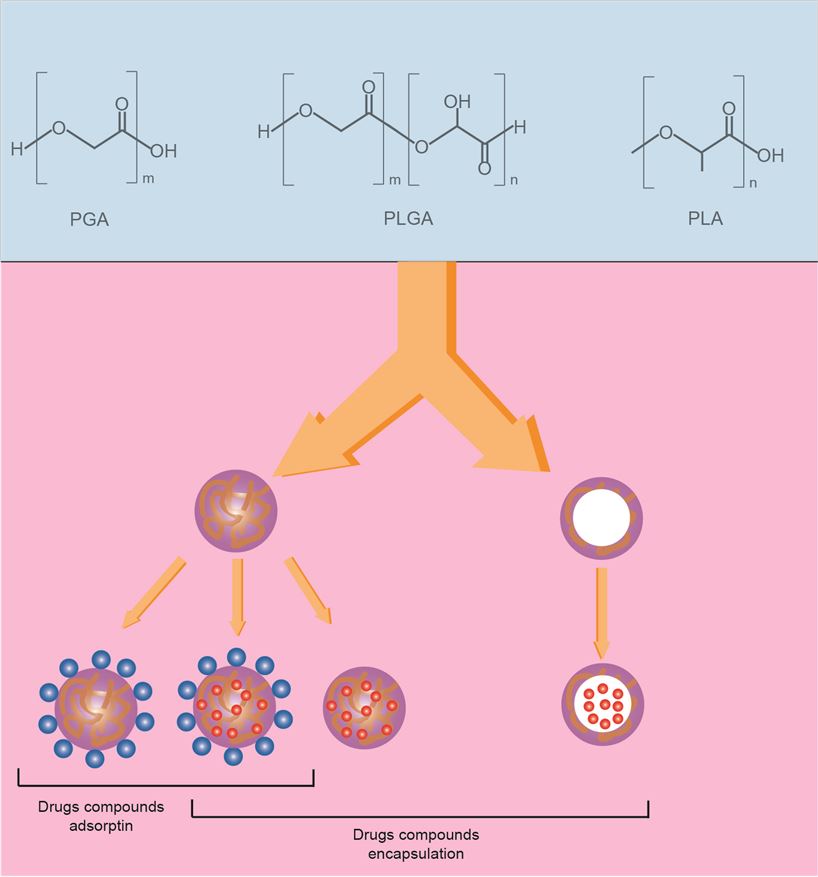 Polyhydroxyalkanoate is a multifunctional biodegradable and biocompatible polyester, produced by microorganisms through fermentation under pressure. Many bacteria from gram-positive and gram-negative bacteria can produce 30-80% of the dry cell weight of PHA. To date, more than 150 different PHA monomers have been identified and classified, so a wide range of polymers and copolymers with different properties can be prepared.

Among them, scl-PHA is brittle in nature, similar to conventional plastics in properties, and is crystalline, hard and fragile in nature, while mcl-PHA is amorphous or semi-crystalline, elastic and rubbery in nature . The degradation of PHA is carried out through abiotic pathways, in which the ester bond is hydrolyzed without any catalytic enzyme; however, the residual product will be degraded by the enzyme during the biodegradation process. Due to the outstanding characteristics of PHAs, they have been approved by the US Food and Drug Administration (USFDA) for clinical applications and used in orthopedics, repair patches, tissue engineering applications, continuous and controlled drug delivery, biomedical devices, and artificial organs.

PGA and PLA belong to the PHA family and are one of the Biodegradable Polymers widely used in biological applications. The copolymer PLGA is composed of PLA and PGA units. PGA has strong hydrophilicity, it is composed of glycolic acid monomer. Generally, ring-opening polymerization of glycol ester (cyclic diester of GA) or polycondensation of GA is used for the preparation of PGA. Although the degradation of PGA is carried out through the citric acid cycle, high concentrations of PGA can trigger an inflammatory response in the body. Its rapid degradation reduces the mechanical strength of PGA, and its insolubility in common solvents hinders the application of PGA. Because of this, it can be used as a filler for other biodegradable polymers or for short-term tissue scaffold applications.

PLA is a naturally occurring aliphatic polyester, obtained from natural resources such as wheat, rice bran, potato starch, corn and biomass. Due to its excellent renewability, biocompatibility and biodegradability, it is widely used in commercial and biomedical applications. PLA is one of the widely explored materials and can be used in various biomedical applications; in fact, it is a material approved by the U.S. Food and Drug Administration and is widely used in therapeutic applications, including surgical implants, tissue culture, and absorbable Surgical sutures, wound closures, controlled release systems and prosthetic devices.

The constituent monomer of PLA is 2-hydroxypropionic acid, which is a chiral molecule that exists in the form of D- and L-enantiomers. The properties of the polymer depend on the stereoregularity of the monomers in the polymer backbone; Therefore, a polymer with desired properties can be obtained by changing the amount of enantiomeric stereocenter (D- or L-) in the resulting PLA. PLA can be synthesized from lactic acid monomer through various processes, such as polycondensation, lactone ring ROP (dimer of lactic acid, called lactide) or direct methods such as azeotropic dehydration and enzymatic polymerization. Among them, polycondensation is the cheapest method. However, it does not produce high molecular weight PLA. In order to obtain high molecular weight PLA, azeotropic dehydration condensation or ROP is usually used. The azeotropic polycondensation method involves the use of a suitable azeotropic solvent to remove water molecules, which manipulates the balance of the polymerization process to produce a relatively high molecular weight polymer at a temperature below the melting point of the polymer.

Polysaccharides are Biodegradable Polymers of natural origin, which contain many functional groups and can be used in various biological applications. Compared with synthetic polymers, they have the advantages of biocompatibility, biodegradability, non-toxicity, low cost, environmental friendliness and ubiquity. At present, cellulose, starch and guar gum are mostly used in the field of biomedicine.

Cellulose is one of the polysaccharides with active hydroxyl groups on the main chain, and it has broad application prospects in advanced polymer materials. Cellulose and its derivatives are environmentally friendly materials and are widely used due to their renewability, degradability and compatibility. However, the application of cellulose is hindered by its insoluble in common organic and inorganic solvents, resulting in poor processing. In addition, hydrophilic cellulose reduces mechanical properties by absorbing moisture. Therefore, the development of cellulose derivatives through chemical modification involving reagents capable of forming bonds with the reactive -OH groups of cellulose is one of the subjects of extensive research in industry and academia, which can reduce the hydrophilicity of cellulose and improve solubility and mechanical properties.

The degradation rate of cellulose by enzymes varies from a few hours to thousands of years, which is an incomplete process. Crystalline cellulose can only be hydrolyzed by a group of interacting enzymes that exist simultaneously, or by a multi-enzyme complex called cellulase. Cellulase catalyzes the hydrolysis of the β-1,4-glycosidic bond between the glucosyl moieties through general acid catalysis. When the product is released, the overall reversal of the anomeric configuration at C 1 is retained. The use of cellulase hydrolysis and enzymatic degradation of cellulose derivatives in vitro has been studied. The results show that the degradation by-product is glucose, and the degradation rate depends on the hydrolysis temperature and time. In addition, the degradation of cellulase is cell type specific. However, the adverse effects of cellulase in the body have not been determined.

Chitin is the second most abundant natural biopolymer. It is a linear copolymer of N-acetylglucosamine and N-glucosamine with β-1,4 bonds. Depending on the processing method used to obtain the biopolymer, these units are randomly or block distributed throughout the biopolymer chain. Chitin is usually found in the shells of crabs, shrimps, crayfish and insects. It can be considered as amino cellulose. The latest developments in fermentation technology show that the cultivation of fungi can provide an alternative source of chitin.

Chitin is processed into chitosan through partial alkaline N-deacetylation. In chitosan, glucosamine units dominate. The ratio of glucosamine to acetylglucosamine is reported as the degree of deacetylation. Depending on the preparation method, the degree may be in the range of 30% to 100%, and it will affect the crystallinity, surface energy and degradation rate of chitosan.

Starch is a water-soluble natural polysaccharide, which is composed of amylose and amylopectin, and is abundant in wheat, corn, potatoes and other plants. Non-cytotoxic starch has been widely used in various biomedical applications, including bone tissue engineering and drug delivery. However, native starch cannot be used in biomedical applications because of its brittle nature and will degrade before the melting temperature, which makes it a poor candidate in terms of mechanical properties and processing properties. In order to overcome this problem, other Biodegradable Polymers are usually used to physically or chemically modify starch to improve its function and performance. However, the research of starch modification and blending modification has achieved good results to improve its performance and processing performance.

Starch is completely biodegradable. Both amylose and amylopectin components are easily hydrolyzed at the acetal α-1-4 bond by amylase, while glucosidase hydrolyzes the α-1-6 bond of amylopectin. Endo-amylase is inactive for the hydrolysis of the branch points of amylopectin, while exo-amylase can hydrolyze the branch and main chain and generate glucose or dimer (maltose) or trimer by attacking the non-reducing end of starch molecules. In most cases, the enzyme is still bound to the chain break and can catalyze the hydrolysis reaction after the first cleavage.

Guar gum is a natural polysaccharide with linear β-D-high molecular weight. It is a legume seed extracted from Cyamopsis tetragonolobus. It has been approved by the U.S. Food and Drug Administration (USFDA) and is generally considered safe for use as an emulsifier, thickener, and stabilizer in foods, treatments, and cosmetics. In addition, it is also certified by the United States Pharmacopeia (USP). Due to its non-toxicity, biodegradability, bioavailability and biocompatibility, guar gum and its derivatives have been extensively studied for various therapeutic applications, such as drug delivery. It is a potential material for oral drug delivery system. It has stability in a wide pH range and is easy to secrete enzymes from colonic microflora. It has a considerable number of hydroxyl groups in the main chain, and it shows high solubility in water, which hinders its biomedical applications. Therefore, circumventing this and improving the mechanical properties of guar gum in biomedical applications is one of the important goals.

Such polymers, which are structurally similar to proteins, have been extensively studied for biomedical applications. However, the immunogenicity and poor mechanical properties of these polymers have led to the development of pseudoamino acids (an amino acids linked by non-amide bonds, such as esters, imino carbonates, and carbonates). Pseudo-amino acids can be obtained by reacting amino acids with other synthetic polymers, block polymers and PEG, or copolymerizing with other monomers. Although the amide bond is stable during hydrolysis, the body has a wide range of proteases that can quickly degrade proteins. These polymers have been used as biomaterials in sutures, stents, and drug delivery devices, and are mainly divided into the following three categories:

Tyrosine-based polycarbonate, polyarylate and polyester have different physical and mechanical properties. Polycarbonate and polyarylate respectively show excellent strength, excellent compatibility, flexibility and elasticity. Copolymers containing PEG exhibit water solubility and self-assembly properties. These polymers are degraded by the hydrolysis of non-amide bonds and degrade into amino acids used in polymerization. Due to its high mechanical strength and stiffness, pseudo-polyamino acids have been studied for plastic surgery applications. Some other amino acids used in biomedical applications have also been explored, including poly(L-glutamic acid) used in adhesives and hemostatic applications.

Oral is a conventional and convenient route of administration. However, some drugs (such as protein-based drugs) are easily degraded by enzymes in the gastrointestinal tract (GIT). Therefore, they must be administered by other routes, such as infusion, injection, and implantation. If you want to make these drugs suitable for oral administration, you must develop formulations of such drugs. In addition, drugs administered by injection or oral administration are not always the best. Because the entire drug concentration is loaded in the body at this time, it causes irritation and induces toxicity. In order to avoid these effects and maintain the optimal drug concentration, multiple administrations are usually required on a regular basis. However, now another method is becoming more and more famous, which is to design new drug delivery systems: release bioactive agents at precise locations and at a precise rate while maintaining optimal drug levels for maximum efficacy and maximum effectiveness. The process of reducing related side effects can be simply referred to as drug delivery. Due to new developments in the pharmaceutical industry and rapid market changes, pharmaceutical excipients are now used as performance enhancers in terms of drug stability, release, and bioavailability. In this case, polymers are universal materials for the development of drug delivery systems because they can improve pharmacokinetics by extending drug circulation and tissue targeting capabilities. In addition, because it can be degraded into biocompatible by-products, and the location and speed of drug release can be controlled, this makes it a high-quality drug delivery vehicle.