Mesoporous silica nanoparticles (MSNs) are synthesized by the reaction of tetraethylorthosilicate and micellar rod of templates. The result is a set of nano-sized spheres or rods filled with regularly arranged pores.

Mesoporous nano-silica has a series of advantages such as adjustable pore size, larger specific surface area and wall thickness, good stability and biocompatibility, etc., which has attracted a wide range of research booms from scientists in different fields. At the same time, the diversity and complexity of the synthesis and structure of mesoporous nano-silica and its modification technologies have left a huge space for exploration by scholars conducting this research. Mesoporous nano-silica is a white powder, which has the characteristics of non-toxic, odorless, non-polluting, high purity, low density and large specific surface area, as well as excellent stability and reinforcement. It is used in the field plastics, rubber, coatings, fibers, etc.. In addition, mesoporous nano-silica can form an organic-inorganic hybrid material with organic or polymer materials, which can not only exert its own small size effect, surface and interface effect, and quantum size effect, but also different modification methods can give the material a variety of other properties. The mesoporous nano-silica matrix contains a large number of pore structures, which can adsorb or absorb guest molecules with a certain size, so it can be used in catalysis, drug delivery and controlled release, gene transfection, heavy metal ion and biomolecule detection.

According to the definition of the International Union of Pure and Applied Chemistry (IUPAC), porous materials can be divided into three categories according to the pore size: those smaller than 2 nm are micropores, those with 2-50 nm are mesopores, and those larger than 50 nm are macropores. The earliest methods used to prepare porous silica, such as aerosol method and aerogel method, inevitably have a problem-the preparation process is difficult to control, so the pores formed are basically disorderly. In 1992, Kresge et al. reported the preparation of M41S series of mesoporous silica with uniform pores and adjustable pore size. Because the synthesis of this type of mesoporous material uses nano-self-assembly technology, it can overcome the shortcomings of disordered pores and make Mesoporous silica has been developed rapidly. Among them, MCM-41 type mesoporous silica uses long-chain alkyl trimethylammonium bromide as a template, TEOS as a raw material, and is synthesized under alkaline conditions with hexagonal pore mesoporous nano-silica. Adjust the length of the alkyl chain in the surfactant molecule and its pore size can be adjusted in the range of 2-10 nm. Due to its highly regular mesoporous structure, easy synthesis, simple and regular structure, it is currently the most widely studied and used mesoporous material, and it has almost become synonymous with mesoporous materials.

There are many methods for synthesizing mesoporous silica, but the core is the sol-gel method. Generally speaking, its synthesis can be divided into two steps: (1) Under the catalysis of acid or base, using surfactants or other porogens as templates, the inorganic monomer silicon is derived from the assembly to form an organic-inorganic liquid crystal phase. Hydrolysis and condensation form a composite of silica and organic template; (2) The organic template is removed by high-temperature roasting, chemical extraction, microwave heating, or supercritical liquid extraction, to obtain mesoporous silica.

Application of MSNs in Drug Delivery and Controlled Release 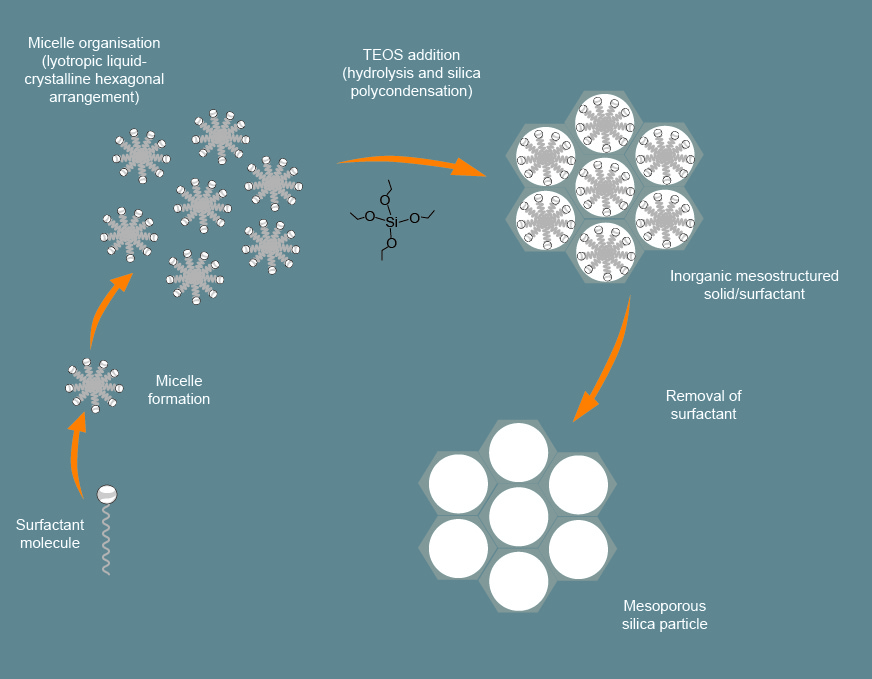 Although the traditional drug loading method can play a role in slow drug release to a certain extent, it is difficult to realize that the drug loading system releases the drug after reaching the lesion site, so may cause serious damage in normal cells or the tissue. Therefore, an ideal drug delivery system not only requires high drug loading, excellent biocompatibility, and good cell or tissue specificity, but also requires the loaded drug to "zero release" before reaching the target site. It is released at an appropriate speed when it reaches the target site or under certain conditions of stimulation. The intelligent drug release system refers to the intelligent release under certain external stimuli, such as pH, light, heat, reducing agents or other special biological molecules. In recent years, mesoporous silica materials have received extensive attention for the controlled release of smart drugs.

Compared with other drug-carrying systems, the advantage of this system is that the target drug molecules are blocked in the pores of MSN by CdS quantum dots of a certain particle size, so as to be physically covered in the pores, rather than through adsorption or sol-gel method, thereby avoiding the leakage of a certain size of drug/neurotransmitter. This new type of MSN system plays an important role in the development of a new generation of position-selective controlled release delivery nanocarriers.

Since different cells and tissues in the human body have different pH values, such as the low pH value in the microenvironment of cancer cells, designing a pH-responsive drug release system is of great significance for drug release at specific sites. As we all know, the pH in gastric juice is low, about 1, while the pH in the intestine is relatively high. At the same time, in view of the high absorption efficiency of oral drugs in the intestine, the design of a drug release system at high pH can improve the utilization of oral drugs.

The core idea of light-responsive drug release is to break chemical bonds or change configuration through light, so that drug molecules can be released in a controlled manner. The azobenzene group was grafted onto the surface of MCM-41 by post-modification, and then the analog drug rhodamine B was encapsulated by the interaction force between the trans-azophenyl group and β-cyclodextrin Inside the mesopore of MCM-41. According to relevant literature reports, β-cyclodextrin has a strong binding force with trans-azobenzene, but there is almost no force between β-cyclodextrin and cis-azobenzene. Therefore, under the irradiation of 351 nm light, azobenzene changes from trans to cis, dissociates from β-cyclodextrin, and releases the guest molecules.

The use of special molecules in the body to stimulate the drug release system to control the release of drugs has also attracted the attention of the majority of researchers. As we all know, the most commonly used drug for the treatment of diabetes is insulin, but excessive intake can lead to low blood sugar and cause syncope. Researchers reported a MSN-based dual-release system that responds to sugar stimulation. This system can precisely control the rapid release of insulin and cyclic adenosine monophosphate (cAMP) under sugar stimulation to achieve a therapeutic effect.