In general, either or both of the corona and core part of the pH-responsive nanoparticles will respond to the external pH to change their soluble/insoluble or charge states. A series of MSN-based stimuli-responsive systems have been shown as a good example. The caps such as polyamine and DNA were linked on the surface of MSNs through electrostatic attraction and were uncapped from MSNs under low pH condition. By contrast, the caps including supramolecular stoppers and inorganic nanoparticles were anchored on the surface of the MSNs by acid-labile bonds such as in acetals. The third gating mechanism involves the reversible reaction between polyalcohols and boronic acids to form boronate esters. While at pH 2.0-4.0, the hydrolysis of the boroester bond took place and thus resulted in a rapid release of the entrapped drug. 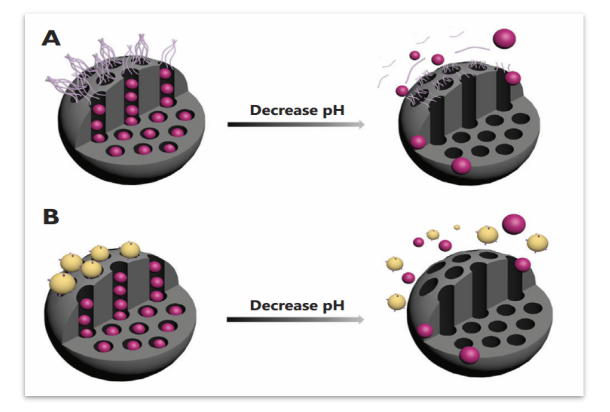 Figure 1. Graphical representation of the pH-responsive MSNs capped with polymers (A) and nanoparticles (B) that linked to the surface of MSNs via pH-sensitive linkers. (Ke-Ni Yang, et al. Cancer Biol Med. 2014,11:34-43.)

Various materials can be used as gatekeepers to control drug release under acidic conditions to broaden the application of nanoparticles in pH-responsive controlled-release system. This technology has great potential for application in tumor therapy and for improving anti-cancer drug efficiency and decreasing side effects. However, most work is focused on in vitro studies, more customized manipulation of the pH-responsive drug delivery system in vivo via pH change need to be done to improve its therapeutic application.