Polymer is a class of natural or synthetic substances composed of macromolecules that are multiples of monomers. Polymeric nanoparticles are manipulatable materials and have the potential of reabsorption in the body. Due to their favorable properties such as good biocompatibility, easy design and preparation, a variety of structures and interesting bio-mimetic characters, and especially their ability to deliver therapeutic agents directly into the intended site of action with superior efficacy, they have attracted greater attention in the last two decades as a multifunctional nanotechnology-based drug delivery system. They consist of macromolecular materials and can be used therapeutically as adjuvant in vaccines or drug carriers in which the active ingredient is dissolved, entrapped, encapsulated, adsorbed or chemically attached.

With its characters as a nanocarriers, polymeric nanoparticles protect drugs against in vitro and in vivo degradation, releases the drug in a controlled manner and also offers the possibility of drug targeting to achieve increase in drug therapeutic efficacy and reduction in side effects. Also among different delivery systems, polymeric based nano-carriers have numerous properties such as simple to synthesize, inexpensive, biocompatible, biodegradable, non-immunogenic, non-toxic and water soluble. Polymeric carriers avoid the interaction of the drug with macromolecules such as proteins, which could sequester the active ingredients preventing its arrival at the action place. Polymer-based systems are more cost-effective and easier to produce and scale up than liposomes with long stability profiles. Decreased toxicity, occurrence of adverse drug reactions and better drug utilization can be realized by taking advantage of this type of carrier. Chitosan, poly(methyl methacrylate), polyhydroxyalkanoates, poly-(lactic-co-glycolic acid) are typical polymers which are most widely used in drug delivery system and show great potential in therapeutic diagnostics applications.

Chitosan is one of the most widely used natural hydrophilic polymers. Its nontoxic, biocompatible, antibacterial and biodegradable properties have led to significant research towards drug delivery applications. The primary amino groups in chitosan act as the reactive site for a variety of new group attachment to generate different physical and chemical derivatives using mild reaction conditions. Their amino groups are also responsible for various properties of chitosan such as cationic nature, controlled drug release, muco-adhesion, permeation enhancement, etc. Different formulations of chitosan materials as microspheres, tablets, nanoparticles, nanofibers have been explored for drug delivery applications.

PMMA, a non-biodegradable synthetic homopolymer of methylmethacrylate monomer (MMA), is one of the most widely explored biomedical materials for drug delivery because of its low cost, potential for scale-up investigation and easily availability, especially its biocompatibility. Kinetics of release occurs typically in a biphasic way with an incomplete drug release related to polymer hydrophobicity and low porosity. Potential biomedical application of PMMA-based nanocarriers includes their use as adjuvant for vaccines and carriers of many drugs such as antibiotics, antioxidants, anti-inflammatory and antineoplastic via different routes of administration.

PLGA, the copolymer of poly lactic acid and poly glycolic acid, is one of the widely used biodegradable polymers in medical applications. The commercial availability of PLGA, favourable degradation in physiological conditions, possibility of tuning surface and physio-chemical properties, sustained drug release, presented PLGA as the most interesting polymeric drug carrier in many clinical applications. PLGA undergoes hydrolytic degradation in aqueous environment where ester linkages present along the polymer backbone are randomly hydrolyzed. Its reduction forms, water-soluble fragments, are hydrolyzed to lactic and glycolic acids that are finally broken down to form energy, carbon dioxide and water by the normal metabolic pathways of the body. 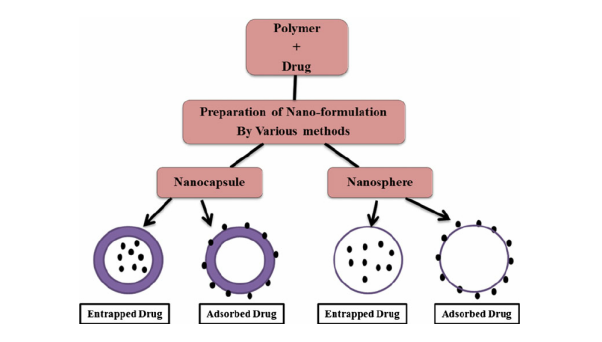 Figure 1. Different types of polymer-based nanoparticles. Drugs can be loaded in the polymeric nanocapsules/nanospheres by entrapment or absorption. (Kumar, S., et al. BioNanoScience, 2012, 2(4), 227-250.)

CD Bioparticles is specialized in the development of drug delivery systems and customizing nanoparticles for drug delivery utilizing our core technologies. With our high-quality products and services, the efficacy of your drug delivery can be tremendously improved.

We offer well-designed drug-loaded polymeric nanoparticle products based on chitosan, PMMA, PHA, PLGA matrix and so on. Clients may select the material type, particle size, size distribution, and/or surface functional groups such as carboxyl or amine groups. And we also provide custom services for designing and synthesizing polymeric carriers with special required drug loading, together with its analysis and characterization before and after encapsulation.