Nanoscience is a science that studies the properties and applications of materials in the size range of 1-100 nm. Since its birth in the late 1980s, it has been favored by scientists all over the world. The aggregates of atoms and molecules are generally at the nanometer scale and can exhibit special or even completely different physical and chemical properties from macroscopic objects. Therefore, directly manipulating atoms and molecules to construct nanostructures, nanomaterials and nanodevices with specific functions has become the focus of nanoscience research.

DNA is the abbreviation of deoxyribonucleotide, is the main genetic material, and plays an extremely important role in the storage and transmission of genetic information. In 1953, Watson and Crick used X-ray crystal diffraction technology to successfully infer the double helix structure of DNA, and then the principle of base complementary pairing was also proposed. In 1982, Seeman proposed that DNA can form a specific structure through the principle of base complementary pairing, and a single structure can form a complex two-dimensional or three-dimensional structure through sticky ends. This shows that DNA is no longer just genetic material, but can also be used as a natural nanomaterial to construct various functional structures and nanodevices. The idea proposed by Seeman is the core of DNA nanotechnology. Since then, DNA molecules have attracted widespread attention in the field of nanoscience. Researchers have designed and synthesized a variety of functional DNA and different DNA structures. DNA nanotechnology has also penetrated into many fields. This article will mainly introduce DNA origami nanostructures and the application of DNA origami in the field of analysis, detection and disease treatment. 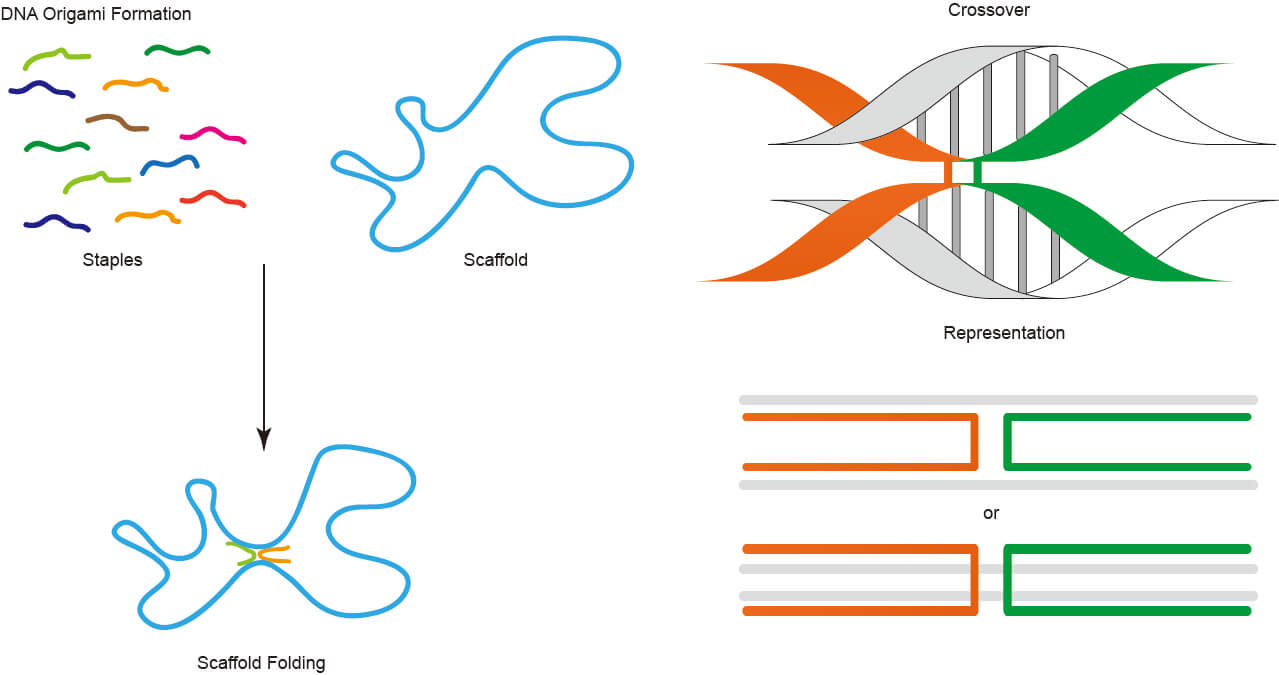 DNA origami uses the special structure of DNA molecules and the principle of complementary base pairing to fold a specific region of a long circular single-stranded DNA and fix it with a short chain to construct the desired structure. DNA origami is mainly completed in five steps: first construct the expected geometric model and scaffold chain, then fold the special area of the scaffold chain, then combine the excess staple chain with the scaffold chain, and then adjust and merge the staple chain , And finally annealed to get the expected DNA nanostructure.

DNA origami is an extension of traditional DNA self-assembly. Compared with traditional tile self-assembly, it has the advantages of high graphic complexity, convenient coding, rapid response, and low cost. Although DNA origami has just started and is still trying and exploring in practical applications, its application prospects are very broad. The structure of DNA origami is designed as expected, so all positions in origami DNA are addressable. Therefore, DNA has become an ideal model for nano-arrangement, which can be applied to the assembly of nano-materials, the precise positioning of nanoparticles, and single-molecule detection. In addition, DNA origami can be used to assemble various three-dimensional structures with different shapes, and may also be used in fields such as drug delivery and disease detection.

The Application of DNA Origami in the Field of Drug Transportation

DNA molecules can self-assemble to form a specific functional structure, and have the advantages of high stability, good biocompatibility, and low cytotoxicity. Therefore, they are used as a carrier for drug delivery and can reach target cells for treatment under the action of targeted agents. Using the method of rolling circle amplification, a long DNA chain and a small number of short staple chains can be folded into the expected DNA origami structure, which can be used as a carrier for CpG immunostimulatory drugs; the DNA chain also It can bind to the surface of gold nanoparticles to form a spherical nucleic acid structure, which has multiple functions such as drug transportation and imaging. In addition, combining DNA molecules with azobenzene can achieve controlled release of drugs.