Hydrogel is a polymer network system with a hydrophilic three-dimensional network cross-linked structure. It has a soft shape and maintains a specific shape, can absorb a large amount of water, and has improved mechanical properties, as well as good biocompatibility and biodegradability. Since the preparation was proposed by researchers in the 1950s, it has been widely used in various fields, such as tissue engineering, drug delivery, 3D cell culture and other medical fields.

Over the years, people have defined hydrogels at different levels. Over the years, people have defined hydrogels at different levels. One of the most common claims is that hydrogels are a network structure formed by cross-linking and swelling with water by one or more monomers through simple reactions. Another argument is that hydrogel is a polymer material, which has the ability to swell with water and can store a large amount of water inside its structure, and the material itself does not dissolve in water. In the past few decades, hydrogel has received great attention because it has shown extraordinary application potential in various fields. Hydrogel is rich in water and has good flexibility. This property makes it very close to biological tissues, thus creating a huge application value in the biological field. The polymer skeleton that constitutes the hydrogel network cross-linked structure contains a part of hydrophobic groups and a part of hydrophilic groups. The hydrophilic groups can bind to water molecules and make it have strong water-locking ability. The presence of hydrophobic groups makes the hydrogel have the property of swelling in water, and the cross-linking between the polymer skeletons causes the hydrogel to maintain a three-dimensional structure in water without dissolving.

Nano-hydrogels are nano-sized hydrogels, which have the advantages of macro-hydrogels and nano-particle systems. Due to the advantages of good stability, high drug loading efficiency, long drug release cycle and functionalization, nanohydrogels have become a rapidly developing type of drug carrier materials in recent years. 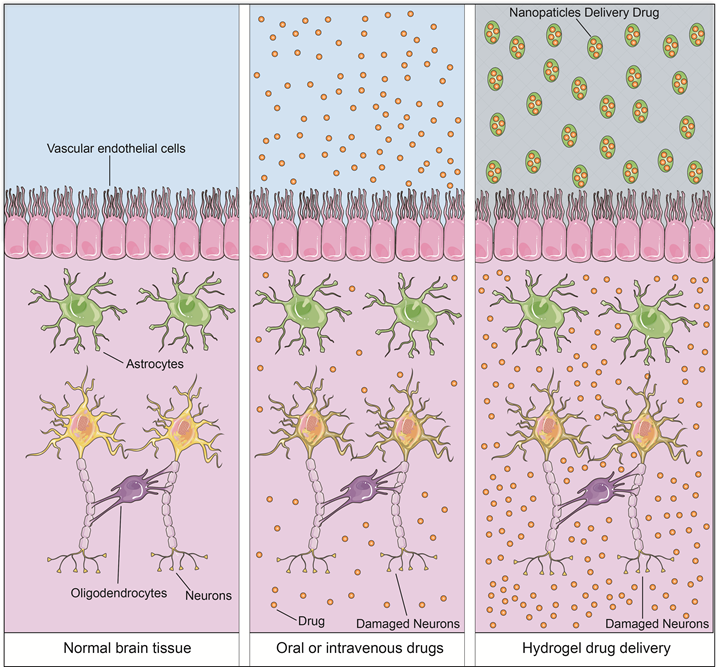 Nano hydrogels can use polymer networks to protect drugs, and have the advantages of good biocompatibility of hydrogels. At the same time, modified nano hydrogels can respond to environmental stimuli, making nano hydrogels an excellent class of Drug-loaded delivery system. Due to the smaller nano-sized structure, it has greater advantages than macroscopic hydrogels in some aspects. First of all, the smaller nano size facilitates the passage of nano hydrogels through the digestive system and human blood circulation system, and at the same time easily traverses some biological barriers to deliver the drug to the designated lesion site. Secondly, polymer nanohydrogels are simple to prepare, have good biocompatibility, and have a larger specific surface area to load more anticancer drugs, while protecting the drugs from being damaged by the complex external environment during the delivery process. More importantly, the design of nano hydrogels, such as the targeted modification of the surface of the nano hydrogels, or the design of the internal structure, makes the prepared nano hydrogel drug delivery systems have good targeting capabilities. At the same time, it responds irritatingly to changes in the chemical environment of the lesion. Therefore, in recent decades, extensive research has been conducted on nanohydrogels as drug delivery systems, and great research results have been achieved. As a drug-carrying delivery system, nanohydrogels are generally used to load a class of common anti-cancer drugs that are easily biodegradable, short half-lives, and lack targeting, such as nucleic acids, protein drugs, and common chemical drugs.