Polymer micelles are a kind of self-assembled structure with solvophobic core and solvated shell by phase separation of amphiphilic polymer in selective solvent.

Similar to small-molecule surfactants, the amphiphilic polymer molecules in the aqueous solution exist as single molecules at low concentrations. When the concentration exceeds the critical micelle concentration (CMC), due to intermolecular forces such as hydrophobicity, static electricity, hydrogen bonding, etc. , The hydrophobic regions of the polymer attract each other and associate together to form micelles. The CMC of polymer is much smaller than that of small-molecule surfactants. At the same time, the hydrophilic region of polymer micelles forms a hydrophilic shell, which enhances the stability of the micelles. Therefore, polymer micelles are more resistant to the influence of dilution (such as the huge dilution ratio caused by intravenous injection). The distribution of drugs in micelles depends on their polarity and hydrophobicity. The particle size of polymer micelles generally does not exceed 100 nm, and has the characteristics of wide drug loading range, stable structure, excellent tissue permeability, long residence time in the body, and targeted delivery.

Polymer micelle materials include homopolymers and copolymers. The latter includes block copolymers and random copolymers. Among them, block copolymers have been studied more. The hydrophilic region of the amphiphilic block copolymer is mainly polyethylene glycol (PEG) or polyoxyethylene (PEO). Polyethylene glycol is non-toxic, hydrophilic, and has good biocompatibility. Its high hydration and large steric hindrance can prevent micelles from gathering into secondary micelles. The hydrophobic region has a wide range, including polyoxypropylene, polystyrene, polyamino acid and polyester. Among them, biodegradable polymers have good biocompatibility and are more suitable as drug carrier materials. 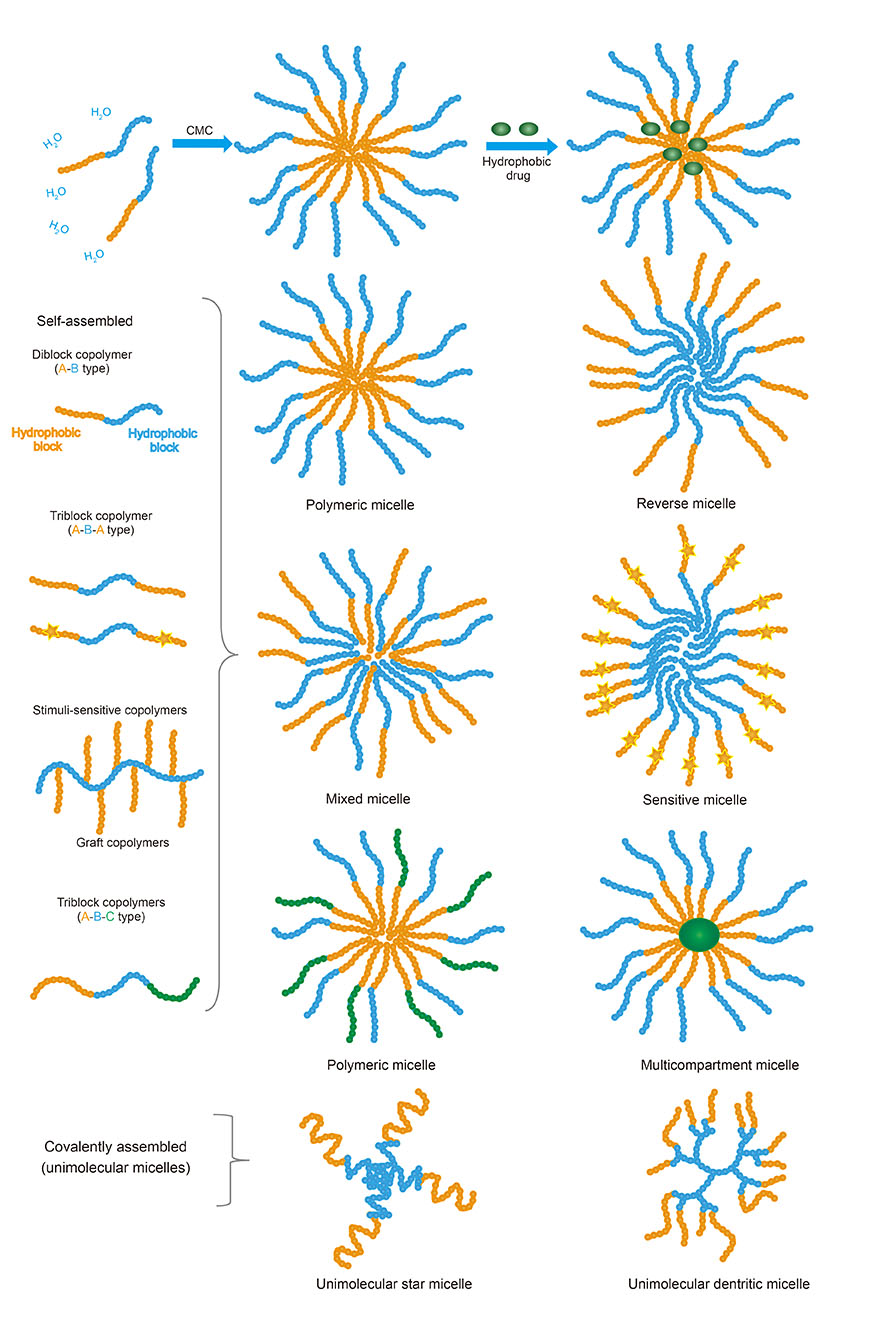 Random copolymers are also called graft copolymers, such as amphiphilic modified derivatives of natural polymers, including modified chitosan and cellulose derivatives, and can also form polymer micelles. Chitosan has good biocompatibility and biodegradability. After carboxymethylation, sulfonation or hydroxypropylation, and glycolization, water-soluble chitosan is obtained, which is further modified with acyl chloride, alkyl halide and glycidyl ether. The amphiphilic chitosan derivative is obtained, and they can be hydrophobically associated to form micelles in water.

Polymer micelles are usually prepared by direct water dissolution or dialysis. When the concentration of the water-soluble polymer is higher than CMC, it will be directly dissolved in water at room temperature or after heating to form a transparent micellar solution. The poorly water-soluble polymer is first dissolved in a water/organic solvent mixed solution, and then dialyzed to remove the organic solvent to form micelles. The drug encapsulation is carried out in the process of preparing polymer micelles, and the preparation process is related to the properties of micelles and drugs. Fat-soluble drugs are encapsulated in polymer micelles through hydrophobic interactions. Both the growth of the hydrophobic chain of micelles and the increase of the hydrophobicity of the drug will increase the drug loading; however, if the hydrophobic chain is too long, the size of the micelles will increase, and the stability of the micelles will decrease, and they will be easily swallowed by the mononuclear macrophage system in vivo. The preparation methods of drug-loaded polymer micelles specifically include a dialysis method and an oil/water drying method. The former method is to dissolve the drug and polymer in the same organic solvent, and then dialyzed with water to completely remove the organic solvent. The disadvantage of this method is that the drug and micelles will partially precipitate, which affects the drug encapsulation efficiency and drug loading efficiency. The latter method is to add the drug dissolved in an organic solvent dropwise to the micellar aqueous solution, and volatilize to remove the organic solvent so that the drug enters the core of the micelle. In addition, drug can be tightly combined with the hydrophobic area of the oppositely charged polymer micelle through electrostatic force to make micelles. This method is simple to make and the obtained micelles are stable, but the conditions are not easily met, and it is not used much.

One of the advantages of polymer micelles as drug carriers is to extend the circulation time of the drug in the body and increase the plasma half-life, which is mainly due to the hydrophilic long chain of its shell. The PEG chain can avoid the conditioning effect of the blood, reduce the phagocytosis of micelles by the mononuclear macrophage system, and prolong the circulation time in the blood. The conditioning effect is mainly the adsorption of the polymer micelles by the proteins in the plasma, which can destroy the structure of the micelles and cause the leakage of the packaged drugs. Protein adsorption can also trigger many biochemical processes, such as the complement cascade, coagulation chain reaction, and fibrinolysis. The opsonized particles are easily recognized and swallowed by macrophages, allowing them to accumulate in the liver, spleen, lung and other tissues rich in macrophages, reducing their chances of reaching target tissues (such as tumors).

Although the CMC of polymer micelles is very low, after it enters the blood circulation, it may still be diluted by a large amount of blood and the concentration drops below CMC. The micelles dissociate, resulting in early release of the drug and unable to exert long-term and targeted effects. New methods are needed to improve the stability of micelles. Fixing the inner core or outer layer of polymer micelles through chemical cross-linking methods can improve the stability of the micelles and turn them into "single-molecule micelles". The chemically cross-linked micelles can be separated and redispersed like nanoparticles, are not easily broken in the blood circulation, and can increase the circulation time in the blood.